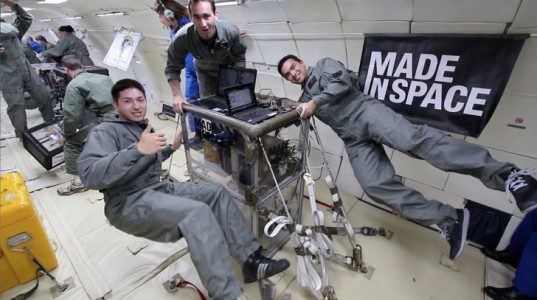 A 3D printer will be installed aboard the International Space Station (ISS) later this summer after the custom-built device passed final NASA certification this month as part of the ongoing 3D Printing In Zero-G project.

The 3D Printing In Zero-G Technology Demonstration (3-D Printing In Zero-G) experiment is hoped to demonstrate that a 3-D printer works normally in space. In general, a 3-D printer extrudes streams of heated plastic, metal or other materials, thus building layer on top of layer to create three-dimensional objects. Testing a 3-D printer using relatively low-temperature plastic feedstock on the International Space Station is the first step towards establishing an on-demand manufacturing facility in space, which is considered as one of the most critical components in enabling deep-space crewed missions and other in-space manufacturing requirements.

The custom-built printer has been developed by Made In Space, a US-based tech firm founded in 2010 with the specific goal of enabling in-space manufacturing, and will launch in August aboard the SpaceX CRS-4 resupply machine. Once aboard the ISS the 3D printer will be installed in the the European Space Agency’s Columbus module, where it is scheduled to print an initial set of 21 demonstration parts.

The printer has already undergone testing aboard parabolic flights that yield 20- to 30-second intervals of weightlessness at a time.

The above video shows an airplane is used by the European space agency; specially modified for parabolic flight to simulate zero gravity.

These parabolic flight tests demonstrated that the device will work in a microgravity environment, which presents specific challenges to a process that typically relies on gravity and surface tension to help form layers without air bubbles or other imperfections that would weaken the finished product.

The lack of gravity aboard the ISS also presents problems for managing heat, which is central to the 3D printing process, as there is no natural convection. Made In Space has not revealed how it solved these problems for IP protection reasons.

Michael Snyder, lead engineer and director of R&D for Made In Space, said: “Years of research and development have taught us that there were many problems to solve to make additive manufacturing work reliably in microgravity.

“Now, having found viable solutions, we can welcome a great change – the ability to manufacture on-demand in space is going to be a paradigm shift for the way development, research and exploration happen in space.”

The main goal of the testing aboard the ISS is to identify how the device reacts to long-term microgravity and to determine how 3D printed materials change when being manufactured in space. Ultimately, NASA hopes to install a permanent ISS 3D printer next year.

The test device will print a variety of objects, including mock-up tools and parts used aboard the ISS, out of acrylonitrile butadiene styrene (ABS) plastic, although Made In Space plans to make a wide array of thermal polymers available, including some that are aerospace grade.

Aside from giving astronauts the ability to replicate tools and parts without having to wait for a resupply mission, having a 3D printer will enable them to manufacture solutions to unforeseen problems. In addition, components printed in space would not need to withstand the high G forces and vibration associated with lift-off, meaning they could be constructed with about 30% less mass.

NASA will release further updates to the experiment at this location: http://www.nasa.gov/mission_pages/station/research/experiments/1115.html

ABOUT US
PRINT NEWS - is a small but resourceful news source based in the UK, focused solely on the global printing and packaging industry written and edited by people working within the industry.
Contact us: contact@print-news.com
FOLLOW US
© Copyright © 2019 Print News UK. All Rights Reserved. Powered by Edible Media Ltd - SEO Liverpool |