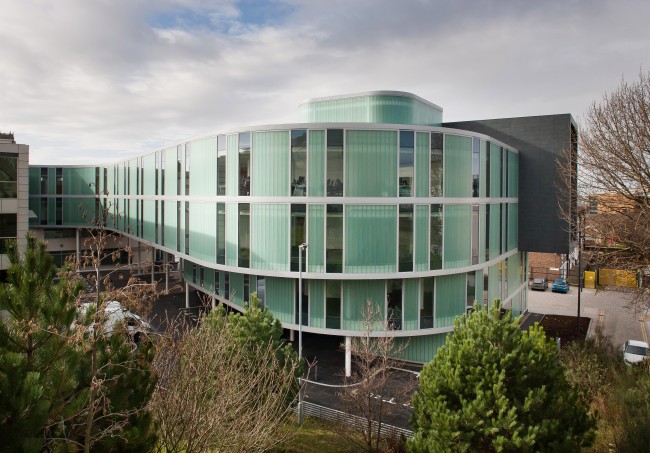 A PIONEERING research company and the architects behind the scheme have been signed up as the first new tenants at Liverpool Science Park’s £8m third building.

Karm Research Group will be moving from its existing premises at the science park into 1,000 sq ft of new laboratory space while Ryder Architecture will be taking 2,500 sq ft of state-of-the-art office space.

The third building, which officially opens this week, was built speculatively in response to growing demand for purpose-built office and commercial laboratory space in Liverpool city centre to accommodate the city region’s knowledge-based businesses.

The four storey structure links via a bridge to the existing Innovation Centre 1 (ic1) building to form a new wing.

Karm Research Group is developing a number of products in the chemistry sector including an antimicrobial product for the healthcare industry and a revolutionary new type of gravure printing cylinder called the ‘hybrid printing cylinder’. Karm has secured around £500,000 in funding from the UK government’s Technology Strategy Board and private investors to commercialise the products ahead of their expected launch later this year.

Mark Jones, technical director at Karm said: “The new labs offer the perfect base for us to develop our products and crucially, being based at the Liverpool Science Park has given us access to the universities and funding routes.

“It’s an exciting time for us as we develop our printing product technologies and we’re in discussions with a number of large global players from Europe, Brazil and the USA.”

Ryder Architecture, the architect behind the high specification new wing, is making the move to the third floor of the new building overlooking the Liverpool Metropolitan Cathedral.

Gareth Callen, director at Ryder Architecture which also has offices in Newcastle, London, Glasgow and Hong Kong, said: “It made perfect sense to us to make this our key base in the North West not only because we designed the building, but because the science park itself offers so much in the way of location.

“Being firmly based within the thriving knowledge quarter means we can develop strong links with the schools of architecture at both universities and tap into the world-class talent that they produce.”

Chris Musson, chief executive of Liverpool Science Park said: “We’re delighted to see our first two new tenants sign up to move into the building before it has even opened. This shows that there is real demand for this kind of accommodation for up-and-coming knowledge-intensive businesses in the North West and we hope to sign up more companies very soon.

“Completion of this development marks the next phase in Liverpool’s plans to strengthen the community of like-minded science and technology businesses based in the city’s knowledge quarter.

“The new facilities will help Liverpool to compete as a centre for commercial technological innovation both regionally and nationally.”

Morgan Sindall has carried out the construction work on the project which has taken just under 12 months to complete.