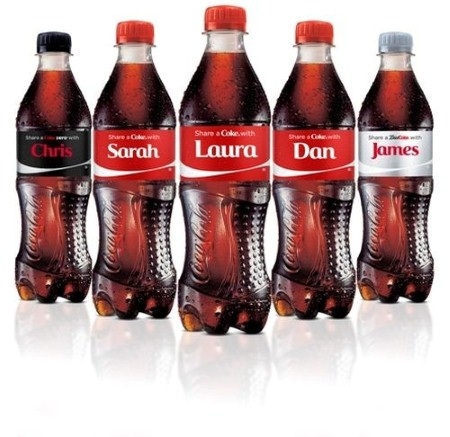 Printpack (UK) recently announced that they were awarded first prize in the Label of the Year category at the UK Packaging Awards held at the London Hilton, Park Lane at the end of 2013.

Printpack’s winning entry was with Coca-Cola Enterprises’ Share-a-Coke labels, produced in partnership with three digital printers. Coca-Cola’s campaign objective was to offer consumers personalised bottles and involved 150 names being printed on 500ml and 375ml bottle labels. With the profile of personalised bottling raised across Europe, Coca-Cola believes this is the start of trend that will evolve in to even greater consumer intimacy with promotional branding.

Gregory Bentley, R&D Packaging Innovator Coca-Cola Enterprises said: “This was the largest global promotion ever undertaken by Coca-Cola with three-party engagement and Printpack’s technical expertise was critical to its success. Through their close partnership with the digital printers they coordinated the project from concept to delivery and we are delighted with the finished results. It is fantastic news that the Share-a-Coke labels have been recognised by a major industry award.”

Barry Bleasdale, Printpack UK Sales & Marketing Director said: “The project was technically very demanding and we overcame a number of challenges through our close cooperation with the digital printers and Coca-Cola. The awards success is testament to Printpack’s dedicated sales and technical teams who have worked so hard on the project.”

Printpack was also a finalist in the UK Packaging Awards.

Printpack is a major converter of flexible and specialty rigid packaging with an over fifty-year history of innovation, with twenty-eight manufacturing plants throughout the United States, Mexico, the United Kingdom, Poland, and China, allowing Printpack the flexibility to offer a broad range of packaging options globally.